May 27, 2017 – The bands first facebook LIVE Q&A will launch with their drummer David B Hope Saturday the 27th at 3:00 PM EDT(USA). Dave will be on live to chat all things Apocalyptic Lovers & any other music related topics fans wish to discuss. Many people have already submitted question for Dave, so if you have one and want to make sure it is addressed please send it in via facebook to the band or Dave.

This will be the first of at least 4 monthly facebook live Q&As with members of the band. Next up in June singer Robert Kane will be live to also do a Q&A along with a live performance. 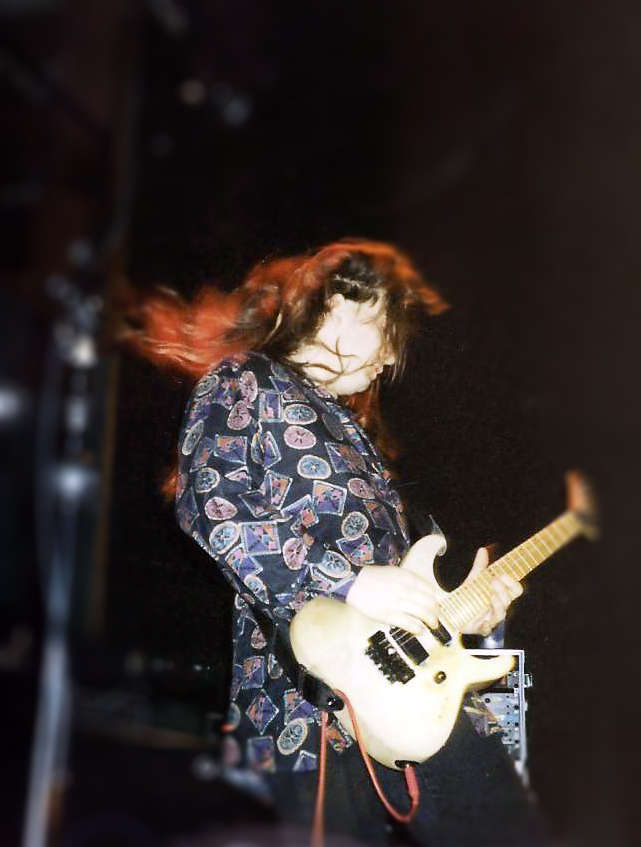 May 23, 2017 – Redemption Vol I is just over a year old since its release and the news just doesn’t seem to stop! The following details what is in store for the Apocalyptic Lovers this Thursday through Saturday including their first ever Q&A session on facebook live.

Thursday, May 25 – WARRANT lead singer Robert Mason will be the special guest on the Hair Metal Mansion with Andrew the Axeman. The show will also mark the debut of a song from the Apocalyptic Lovers album, Redemption Vol I. Andrew had Redemption Vol I sitting at number 3 on his Top 25 of 2016, so make sure to tune in to see what track he has picked for the Warrant episode. For the schedule of air times and stations please click HERE.

Saturday, May 27 – The bands first facebook LIVE Q&A will launch with their drummer David B Hope this Saturday at 3:00 PM EST. Dave will be on live to chat all things Apocalyptic Lovers. Many people have already submitted question for Dave, so if you have one and want to make sure it is addressed please send it in via facebook to the band or Dave. This will be the first of at least 4 monthly facebook live Q&As with members of the band. Next up in June singer Robert Kane will be live to also do a Q&A along with a live performance.

A look ahead: Friday, June 2 – The Power Rock Podcast will interview the Apocalyptic Lovers lead guitarist and main song writer Sean Magee. Sean does not do much in the press, so this should be a great interview. Air time is 6:00 PM EDT, so make sure to visit the Power Rock Podcast facebook page and tune in! 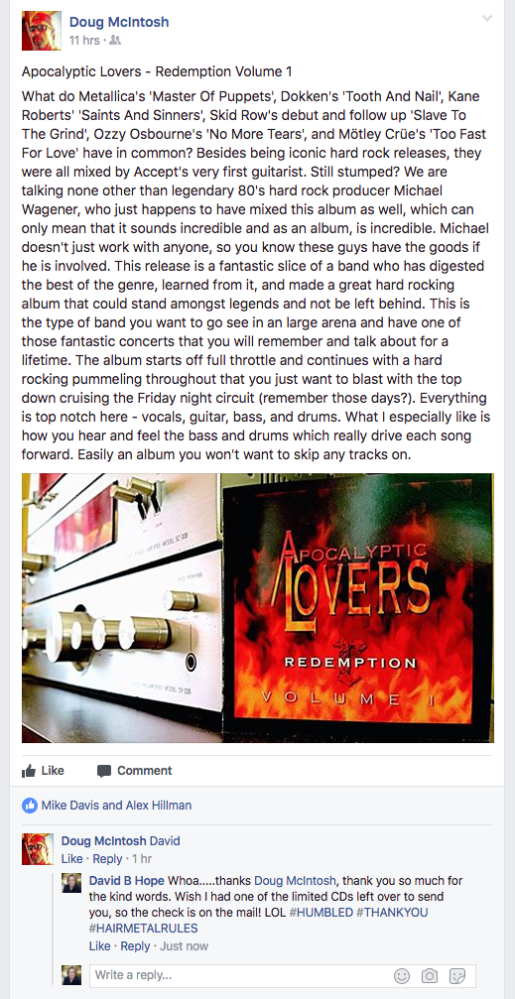 May 19, 2017 – Originally posted May 17th, 2017. Doug McIntosh of the Melodic Mafia wrote, “What do Metallica’s ‘Master Of Puppets’, Dokken’s ‘Tooth And Nail’, Kane Roberts’ ‘Saints And Sinners’, Skid Row’s debut and follow up ‘Slave To The Grind’, Ozzy Osbourne’s ‘No More Tears’, and Mötley Crüe’s ‘Too Fast For Love’ have in common? Besides being iconic hard rock releases, they were all mixed by Accept’s very first guitarist. Still stumped? We are talking none other than legendary 80’s hard rock producer Michael Wagener, who just happens to have mixed this album as well, which can only mean that it sounds incredible and as an album, is incredible.

Michael doesn’t just work with anyone, so you know these guys have the goods if he is involved. This release is a fantastic slice of a band who has digested the best of the genre, learned from it, and made a great hard rocking album that could stand amongst legends and not be left behind. This is the type of band you want to go see in an large arena and have one of those fantastic concerts that you will remember and talk about for a lifetime. The album starts off full throttle and continues with a hard rocking pummeling throughout that you just want to blast with the top down cruising the Friday night circuit (remember those days?). Everything is top notch here – vocals, guitar, bass, and drums. What I especially like is how you hear and feel the bass and drums which really drive each song forward. Easily an album you won’t want to skip any tracks on.”

Note: The band would like to thank Doug for the wonderful and unsolicited review of their album. Doug has no prior relationship to the Apocalyptic Lovers nor has he ever met anyone in the band before. This review was posted not only because it was well written, but it was a persons unedited, genuine opinion of an album of work.

Doug stated that he listened to the album on a streaming service and then purchased the bands physical CD on Amazon. Once he received his order, Doug listened to the album more and posted his thoughts via his facebook page. Many times bands will solicit various music websites, podcasts & magazines for reviews to aid in getting the word out regarding their release. In this case, someone used a streaming service for what it is meant for (finding & sampling new music) and actually bought an entire album because he enjoyed the product. Cheers Doug!

May 18th, 2017 – All 4 members of the Apocalyptic Lovers are scheduled to be on Digital Revolution Radio this Saturday evening LIVE at 9:00 PM EST.

The host of the station’s very successful Saturday show The House That Metal Built – DJ Crazy Train – asked if the group would join him on air, so here are the details for this weeks rock and talk show.

Please join Robert Kane, Sean Magee, Mike Nagy & Dave Hope as they chat all things Apocalyptic Lovers! Topics will include – the early days of Love And War, why the name change, working with producer Michael Wagener, the follow up album to Redemption Vol I, going live on Facebook at the end of the month, live shows plus much more!

Make sure you have the free TuneIn app or use the link below to listen for FREE.

May 4th, 2017 – Hairnetradio.com hailing from Toronto, Canada will begin adding songs to its rotation from the Apocalyptic Lovers album Redemption Vol I this Saturday May 6th.

Make sure to Tune in and check out a large variety of 80s rock and metal 24/7 for free with no commercial interruptions.

To listen from your desk top please click HERE.

Cheers to Beau for making this all happen and digging the tunes!

Originally based out of Youngstown, OH, the Apocalyptic Lovers (formerly Love And War) are George Allan – Bass, Dave Hope – Drums, Robert Kane – vocals, Sean Magee – Guitars, Mike Nagy – Bass. Today the five members populate great cities in AZ, OH, PA, RI, and VA, but this has not deterred them from writing, recording, marketing, and planning world domination one fan at a time.